Posted on June 5, 2014 by pastorsteverichards 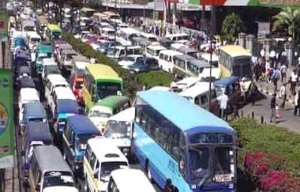 On Sunday, we met our driver at the Tanzanian border. We had gone only a few miles when he was stopped at a police checkpoint. In my previous trips to Africa, I had seen these checkpoints but had never been stopped. Our Kenyan driver told me that was because there were mzungos (white people) in the car. Our Tanzanian driver produced his driver’s license, then was told to pull over and get out of the car. The car was inspected. We refrained from watching all that was transpiring between the police officer and our driver. Later, we asked our friends with whom we were staying about these checkpoints. They are stopped regularly, always with the intent to find some infraction – once it was even for having a dirty car (is there such a thing as a clean car) – that will produce a ticket for 30,000 shillings (about $18). Every day, we pass several of these checkpoints. Yesterday, on our return from Tanzania we were stopped four times – three by police and once by the Kenyan army. Thus disproving the comment that the vehicle is not stopped with mzungos inside. I did ask our friend why I didn’t notice any matatus (mini-vans that shuttle as many as 14 people) being stopped. Even I could see obvious safety infractions in the matatus. His answer: most of the matatus are owned by the police.

At the same time, there is almost total disregard for traffic laws. Traffic lights regularly ignored. Lanes of traffic where there is no lane. Often entering the oncoming lane of traffic. More than once, I’ve thought US drivers would be shooting each other if this kind of driving was commonplace in the US. What amazes me is that the police are not stopping drivers for obvious infractions.

A report by the BBC, lists the traffic in Nairobi as one of the worst in the world. Far worse than any city in the US. Having experienced Los Angeles (the worst that I’ve experienced in the US) and Nairobi, I will have to agree with the BBC.

In our first week, we have not experienced bed nets but most nights our sleep has been disrupted by mosquitoes. It has been too warm to close the windows, and with windows open, mosquitoes enter to feast on the human buffet. The nightly visit by mosquitoes reminds me to take my malaria pill the next morning. I asked my friend about the efforts by many churches and even the NBA to eradicate malaria through bed nets. He didn’t have much information and wasn’t aware of any work in Kenya or Tanzania. Malaria was eradicated from the US largely through the use of DDT which was later found to have significant harmful effects on the environment. Our friend said that many Africans wonder why the US way of eliminating malaria was okay for the US but not okay for Africa. Who decides what’s right for whom?

Life in another country. The differences become clear fairly quickly. We spent three days with my friend who lives in Arusha, Tanzania. We went to college together. He was one of the groomsmen in our wedding. He has lived in Africa for 18 years. “Seeing all the differences from life in the US, why would you want to live in Africa?” I asked. “It’s the people,” he replied. The pace of life is much slower and less stressful. Hakuna matata (no worries). And the closeness of family. I find amazement when we share how far our children live from us and how infrequently we see each other. I still think we are a “close” family, but not in the way it would be defined here.

My friend states that there is much for those of us in the US to learn from Africa. That’s what I hope to learn in the weeks to come.

And so, I turn once again to that verse of scripture that is my guide for this journey: May the God of hope fill you with all joy and peace as your trust in him, so that you may overflow with hope by the power of the Holy Spirit. (Romans 15:13) Today, the key word that speaks to me from this passage is TRUST. In whom do I trust?

This entry was posted in Uncategorized. Bookmark the permalink.